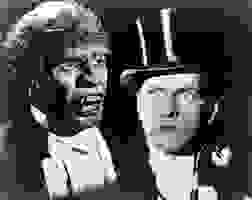 EPE101: Dr. Henry Jekyll, a kind English doctor in Victorian London, who is certain that within each man lurks impulses for both good and evil. One evening, Jekyll attends a party at the home of his fiancée Muriel Carew, the daughter of Brigadier General Sir Danvers Carew. After the other guests have left, Jekyll informs Sir Danvers that, after speaking to Muriel, he wants Carew's permission to push up their wedding date. Sir Danvers sternly refuses Jekyll's request. Later, while walking home with his colleague, Dr. John Lanyon, Jekyll spots a bar singer, Ivy Pierson, being attacked by a man outside her boarding house.

Jekyll drives the man away and carries Ivy up to her room to attend to her. Ivy begins flirting with Jekyll and feigning injury, but Jekyll fights temptation and leaves with Lanyon. Muriel and Sir Danvers leave London for a few months. In the meantime, Jekyll develops a drug that releases the evil side in himself, thus becoming the violent Edward Hyde. Along with his behavior, Dr. Jekyll's appearance changes as well. He transforms into something more menacing and primitive looking. Unlike Dr. Jekyll, Hyde has no conscience. Hyde has no restrictions, no boundaries; he is free to do what he pleases. Hyde returns to the music hall where Ivy works, and offers to tend to her financial needs in return for her company. Hyde manipulates Ivy into accompanying him by terrorizing her, being violent, controlling and torturing her psychologically. He remains at her boarding house until he finds out that Muriel and her father are returning to London, and leaves Ivy but threatens her that he'll be back.

On advice from her landlady Mrs. Hawkins, Ivy goes to see Dr. Jekyll, hoping that he can free her of the abusive Hyde. When she arrives, Ivy sees that the celebrated Dr. Jekyll was the same man who saved her from abuse just months before. She breaks down in tears over her situation with Hyde. Jekyll is extremely distraught over the pain that he (Hyde) has caused her and promises Ivy that she will never have to worry about Hyde again. While on his way to a party at the Carews' home to celebrate their return and the announcement of a new wedding date to Muriel, Jekyll, without the use of his drugs, suddenly changes into Hyde. Ivy, who thought she was free of Hyde forever, is terrified when Hyde appears before her. Hyde angrily confronts her about seeing Jekyll and, just before murdering her, reveals that he and Jekyll are one and the same. Hyde escapes and heads back to Jekyll's house but his servant Poole refuses to open the door. Desperate, Hyde writes a letter to Lanyon from Jekyll instructing Lanyon to get certain chemicals and have them waiting for him at Lanyon's home. When Hyde arrives, Lanyon pulls a gun on him and demands that Hyde take him to Jekyll. Hyde tells Lanyon that Jekyll is safe, but Lanyon doesn't believe him and refuses to let him leave. Realizing there is not much time, Hyde drinks the formula in front of Lanyon. Lanyon is shocked to witness the transformation and tells his friend that he has practically damned his soul for tampering with the laws of God.

The police and Lanyon are standing over Carew's body in the garden. Recognizing the broken cane found next to the body, Lanyon tells them that he knows whose cane that is and agrees to take them to its owner. The police later arrive at Jekyll's lab looking for Hyde and find only Jekyll, who lies that Hyde has escaped. They begin to leave when Lanyon arrives and tells them that Jekyll is the man they're searching for (because the man they are looking for is hiding inside him).


Just then a nervous Jekyll begins changing into Hyde before their shocked eyes. Outraged at Lanyon for betraying him, Hyde leaps from behind the table and attacks him. Hyde then tries to escape from the police but is fatally shot before he can again hurt Lanyon. As Hyde lies dead on the table full of Dr. Jekyll's experiments and potions, he transforms one last time back into Henry Jekyll.